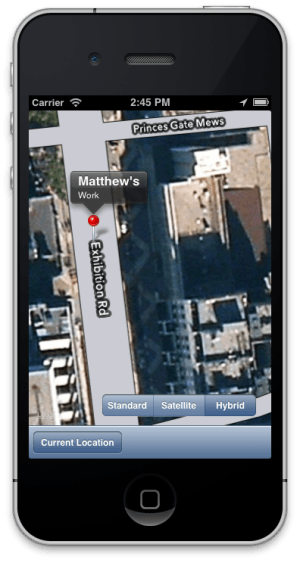 The MKPointAnnotation is the basic version of an annotation that can be used to display a pin along with a title and subtitle. These can come in handy for displaying basic information on a map. If you want to do more than show a point on a map with a title, then you will need to use MKAnnotation and MKAnnotationView. We’ll look at both of those later in this tutorial. Note that you can change the pin as well and provide a custom image. I’ll show you how in the tutorial below.

The screenshot to the left shows what an MKPointAnnotation looks like in its basic form. This is what this short tutorial will cover today. To get started, download the tutorial from yesterday or create a new Single View Application and drag a map to the view, connect it up as an IBOutlet, import MapKit.framework and the CoreLocation.framework. Include both of these in your header file of the associated class with the view.

When done, we can begin.

We first start by creating an MKPointAnnotation pointer as follows:

Alloc and init is essential for this to work. If you skip this line, you will not see an annotation on your map.

Next, we need to configure the annotation. It needs three things to work. First we need to provide a coordinate of where to drop the pin. We then need to supply a title (if needed) and finally, we need to specify a subtitle.

There are a number of ways we can specify the coordinate for the annotation. I’ll start with the long way so that you see a breakdown of how it works. I’ll then cut out a few lines of code to give you a more “compact” version.

On line 4, we access the coordinate property of our MKPointAnnotation and assign it the pinCoordinate.

A shorter way of accomplishing this can be done by using functions. We can cut all of this down to just a single line of code as follows:

We next need to go ahead and add a title and subtitle. The code so far looks like this:

Finally, we need to add the annotation to the map. We do that with the following line of code:

Running the program will now show a pin on Exhibition Road in London. This is not really my Pizza shop and if I remember the area correctly, I don’t even think a Pizza Shop is on that part of the street… anyways.

This will prevent the map from moving to the current location automatically. You can also go ahead and delete the Search button from the storyboard as it isn’t required for this tutorial.

Although MKPointAnnotation is basic and can only provide a coordinate, name and subtitle, you can still use this class when customising the pin. Lets look at the code to do this:

To do this, we create the MKPointAnnotation as above and also add it to the map just like above. What we do next is override the – (MKAnnotationView *)mapView:(MKMapView *)mapView viewForAnnotation:(id method from the delegate which lets us customise the view. For this part of the tutorial we will change the pin to an icon of a Pizza. The code is quite long and I’ll post it in its entirety and then explain what each section of code does. Note that this code is fairly boilerplate as it is and is taken from the Apple documentation with a few tweaks. 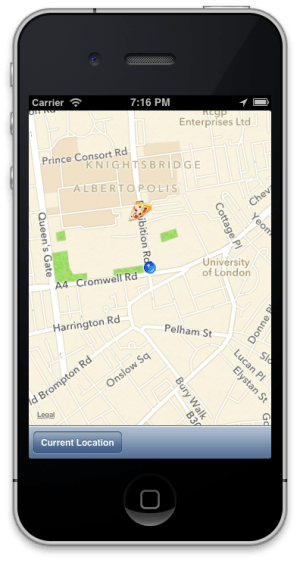 Line 1 is the delegate method called mapView:viewForAnnotation:. Each time an annotation appears in the visible area of the map, this method is called. It is run for each annotation on the map… so if you show your current location and another annotation then the method runs twice if both come in to the view.

Lines 4 and 5 are used to check the current location annotation (the blue dot). If this is the annotation it is being called on, it returns nil which essentially means, leave the annotation as it is as standard.

Line 11 creates an MKAnnotationView called pinView. This line simply checks for any pins that can be dequeued and then moves to the next line. This saves on memory because if a pin is not on the visible area of the map then why have it still there? By dequeuing it you free it up for another pin to take its place. This prevents the need to create another one and reuse it instead. This also helps increase performance when scrolling around the map. Pins off the map are put in a reuse queue.

Line 12 checks to see if there was an existing pin available. As this is our “first” pin on the map of this particular type, this line returns false and it creates a pin to use.

Line 15 we alloc/init the pin and specify the annotation from the argument in the method name. This means that the MKPointAnnotation we created earlier in viewDidLoad is passed in to the init method and provided with a reuse identified.

On lines 16 – 19 we can customise the pinview by setting properties of MKAnnotationView. Although we could use MKPinAnnotationView for this to add the following two properties, pinColor and animatesDrop, there is a bug that changes the image back to a pin when using it. For that reason it is best to currently use the MKAnnotationView class which has a bunch of methods we can use. In this instance we used the .image property to specify the pizza slice image. We also use canShowCallout which lets you tap on the pin to display text. We also offset the image with calloutOffset so that the bottom left corner of the pizza was the actual location.

To change the pin colour, modify the code as follows:

Add the pinView.pinColor line as above.

With the MKPointAnnotation we can also enhance use the MKAnnotationView to add a left and right callout. In this example we’ll put the disclosure button on the right and a thumbnail on the left. We do this as follows: 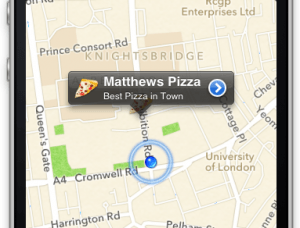 When looking at the last sample code, we would move the else statement down that is on line 20 and would put this code just after line 19 (or anywhere in those curly braces would be sufficient).

Line 21 we create a UIButton and and create it as a UIButtonTypeDetailDisclosure which is a small circle with an arrow in it.

Line 22 we set the rightCalloutAccessoryView property with that UIButton we just created.

Line 25 we are creating a UIImageView and we alloc/init with the imageNamed as an NSString which is the filename you have dragged in to your project.

On line 26 we simply set the leftCalloutAccessoryView property with the UIImageView we just created.

This will then show as the image to the side with an icon, title, subtitle and disclosure button. To get the disclosure button working we need to override the delegate method called mapView:annotationView:calloutAccessoryControlTapped:

Here is some code I took from a sample project that Apple created but I dropped their segue and just created a UIAlertView just so you could see something happening without adding another view controller to the project.

Lines 3 and 4 we are checking if the annotation isKindOfClass. We used the MKPointAnnotation class to create out annotation, so this is what we are checking for. Should you have 2 or more different custom classes then this is how you separate out what to do when a pin is tapped.

Lines 7 and 8 we create a UIAlertView and init with a few details. We then show that alert. What you would more likely do is segue to another View Controller to present information about the particular pin.

The full code for this project is listed below.

As you can see, using the MKPointAnnotation is just for simple annotation pins. Note that in the methods of the MKMapView class you also have addAnnotations: which is similar to addAnnotation: but lets you add several at the same time. To do this, you need to encompass the annotations in to an NSArray and then provide that NSArray as the argument. When doing this, several pins will be added at the same time.