Xcode is the software required to create iOS apps (and Mac apps as well). At the moment there are two versions available which are Xcode 4.5.2 which is designed for those running a Mac with OS X 10.7.4 or later. 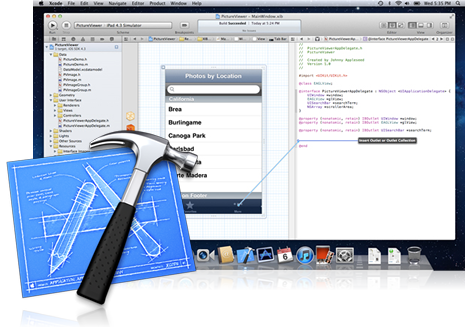 Each of the above mentioned downloads are available at developer.apple.com (exact URL) although to download Xcode, you need to register for a free account. You can also download Xcode from the Mac App Store which will be available in the dock on your system.

The current version of Xcode mentioned above is enough to get you going with designing apps for an iPhone running iOS 6 (as well as older versions). Testing apps in Xcode loads up an iPad or iPhone simulator on the desktop. However, if you want to start developing apps and testing on a device, you’ll need to signup for a developer account which costs about £60/year. Paying to join the developers program also gives you the ability to release apps on to the app store.

Xcode has all the tools that you need to start developing on the Mac which includes the Xcode toolset for Mac as well as the iPhone and iPad (iPod touch included). The Xcode IDE and iOS Simulator is also included as well as the tools and frameworks for building the apps.

You might ask… what is the Xcode IDE or what is an iOS Simulator… Let me explain quickly.

What is the Xcode IDE?

IDE means Integrated Development Environment. This is the application you use to create your apps. It has all the tools that you need to get your app created as quickly and smoothly as possible. It achieves this by integrating the Interface Builder which allows you to design your apps within the Xcode IDE. The IDE also works with Live Issues which analyses your code as you write it and quickly alerts you to errors.

When your app is tested with the iOS Simulator or on a real iPhone/iPad (see details in section below), the Xcode IDE lets you submit your app to Apple along with all the packaged items such as images direct to Apple.

The iOS Simulator is essentially like having an iPad or iPhone built in to your Mac. Apple allows you to test applications on a virtual iOS device that runs on screen. Although this isn’t ideal to only test your app this way before submitting it to Apple for launch, it does let you test the app thoroughly without the need to connect up a real iOS device.

If you want to test your app on a real iOS device, which includes the iPad, iPhone or iPod touch… or if you want to submit apps to the app store then you need to pay to enter the iOS developer program. Here in the UK the cost is £60 for either a business or personal account ($99 in the US). Educational or enterprise developers will pay a different price to enter.

How to Learn the Xcode Software

Xcode can be overwhelming when you first open it up. If you are starting with developing apps right at the beginning then I recommend you read the following tutorials to give you the basic understanding of what to do (several tutorials are listed in the post linked above). Give it a week or so of study and you’ll understand a lot more and have the ability to create a very simple app. Creating something more complicated will of course take more time, but to going from nothing to creating your first “Hello World” app is quite an achievement as it helps you understand the very basics of programming as well as get you more familiar with Xcode and the Interface Builder. We all need to start with something simple so we can grasp the basic concepts and build on them.

As I am still learning the ins and outs myself, I’ll leave it another couple of weeks before I write a blog post about the very basics of Xcode and what does what within the interface.

Don’t forget to subscribe in the box at the top of the right column if you want to follow along with my weekly updates and assignments.